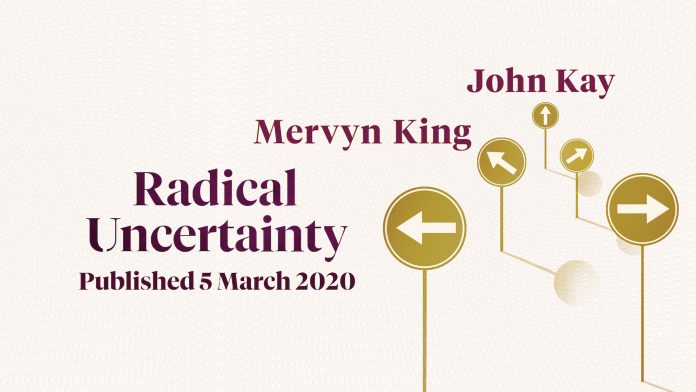 Radical Uncertainty by John Kay and Mervyn King is released 5th March 2020 in the UK. Pre-order a copy here.

The title of this book, and its central concept, is radical uncertainty. Uncertainty is the result of our incomplete knowledge of the world, or about the connection between our present actions and their future outcomes.  Depending on the nature of the uncertainty, such incomplete knowledge may be distressing or pleasurable.  I am fearful of the sentence the judge will impose, but look forward to new experiences on my forthcoming holiday.  We might sometimes wish we had perfect foresight, so that nothing the future might hold could surprise us, but a little reflection will tell us that such a world would be a dull place.

Radical uncertainty cannot be described in the probabilistic terms applicable to a game of chance.  It is not just that we do not know what will happen.  We often do not even know the kinds of things that might happen.  When we describe radical uncertainty we are not talking about ‘long tails’ – imaginable and well-defined events whose low probability can be estimated, such as a long losing streak at roulette.  And we are not only talking about the ‘black swans’ identified by Nassim Taleb – surprising events which no one could have anticipated until they happen, although these ‘black swans’ are examples of radical uncertainty.[1]  We are emphasising the vast range of possibilities that lie in between the world of unlikely events which can nevertheless be described with the aid of probability distributions, and the world of the unimaginable.  This is a world of uncertain futures and unpredictable consequences, about which there is necessary speculation and inevitable disagreement – disagreement which often will never be resolved.  And it is that world which we mostly encounter.  So the ramifications of radical uncertainty go well beyond financial markets; they extend to individual and collective decisions, as well as economic and political ones; and from decisions of global significance taken by statesmen to everyday decisions taken by the readers of this book.