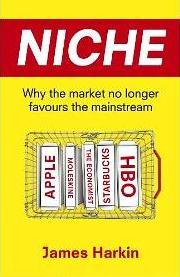 James Harkin, who describes himself as a social forecaster, is a frequent contributor to the Financial Times. So, as you would expect, he writes well, displays keen intelligence, and wears lightly a wide range of expertise. His theme in this book is that successful companies today prosper by focusing on tightly defined market niches. A niche product can be defined as one most people don’t want but is ideally suited for the people who do – products such as specialist dating websites.

Farmers Only, for example, caters to computer-savvy single farmers. If you agree with their slogan, “City folks just don’t get it”, then perhaps this is your niche. Or perhaps you fit better into Geek2Geek: “traditional dating sites don’t work well for them”, the advertising explains.

Other niches Harkin describes are more appealing. Moleskine notebooks, the cool jotters with the elastic strap, are the product in which Ernest Hemingway and Picasso might have made notes for their masterpieces but probably didn’t. The popularity of the Moleskine is the result of a slick marketing campaign created in the past decade by an Italian teacher called Maria Sebregondi. “It’s not the absolute truth,” the entrepreneur behind the phenomenon concedes, when pressed about the apocryphal history.

If you sit down for an evening watching HBO with a tub of Ben & Jerry’s, you are settling into your niche. But as these nice producers prosper, the big beasts – as Harkin rather irritatingly insists on calling large established corporations – are struggling. Woolworths closed its last UK stores in 2009. Gap, fearing it had lost its way, diversified its ranges further only to become even more lost. And then there’s General Motors. What more need one say?

Quite a lot, actually. You might start with the observation that the pay-to-view television channel HBO is a division of the largest media conglomerate of all, Time Warner, and that the ice-cream range Ben & Jerry’s comes to you courtesy of Unilever. The trouble with Harkin’s argument, as with similar business theses, is that it is easy to find a selection of examples that support the case – and equally easy to find a selection of examples to make the diametrically opposite point.

I could visualise – and I am sure Harkin could write with similar brio – a book called Mainstream: How the Market No Longer Favours the Niche. It would applaud the success of Amazon, which not only sells you every book from best seller to academic monograph but will let you buy breakfast cereal, running shoes and nail clippers at the same time. It would also tell you how Google, the search engine for everyone and everything, has seen no serious inroads into its market share from more specialist competition; how Facebook was transformed from an online meeting place for Harvard undergraduates to the social network for the world; how Apple will give you an app for everything you need and a lot of things you don’t; and how Ikea provides self-assembly furniture for anyone who can self-assemble it. (I find myself in the niche of people who know they can’t.)

Mainstream would tell you how the UK supermarket chain Tesco has swept specialist stores out of the high street – in fact, Harkin does tell us that but doesn’t seem to have recognised the problem that it poses for him. Mainstream would chronicle the decline of local newspapers as the internet takes over classified advertising – sorry, but I don’t think that Craigslist can really be described as Harkin describes it, as a niche product.

And while Mainstream would recognise the decline of Woolworths, Gap and General Motors, it would also describe the rise of the companies that proved their nemesis. Businesses such as Poundland and Zara; businesses that do much the same thing but just do it better. At least for now.

And there lies the real story. The niche thesis was articulated 30 years ago by Michael Porter of Harvard Business School, who argued that businesses must avoid being “stuck in the middle”. Porter was right: if you weren’t good at something, you rarely did well. My own research on Porter’s thesis confirmed that high-cost, low-quality businesses tended to have lower profitability than low-cost, high-quality businesses. It wasn’t my most profound insight.

Companies can be successful with almost any market positioning if their capabilities are well-adapted to that positioning. Evolutionary theory has taught us that appropriately developed species can thrive in a large territory or a limited one. Human beings and elephants coexist with bedbugs and cold viruses.

Publishers of social science books today want one-word titles – Blink, Nudge – which promise a new concept unifying apparently disparate phenomena. I know: I’ve succumbed to their demands myself. But it’s a pity that Harkin did. Regarded as a compilation of articles and essays on contemporary business and culture, this book is a good read. But as a thesis, it doesn’t quite add up.

The Edge of Now – David Howell