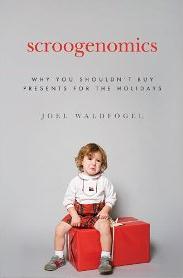 At Christmas 2000, I introduced Financial Times readers to the work of Professor Joel Waldfogel. Waldfogel had taken several pages of the American Economic Review to deplore the inefficiency of Christmas. Most gifts, he wrote, were worth less to their recipient than the money the donor had spent.

Waldfogel supported his argument with data from a survey of his ungrateful students, which showed how little they valued what they had received. He described the gap between the perceived value of the gift and its cost as the deadweight loss from Christmas, and demonstrated that the resulting drag on the American economy could be substantial.

This Christmas, Waldfogel has expanded his argument into a book. He hopes to cash in on the popularity of such economic reasoning, epitomised by Freakeconomics and the FT’s own undercover economist, Tim Harford. The appeal of such arguments lies, at least in part, in their teasing quality: are the authors really barking mad or are they just kidding?

Scroogenomics costs £6.95; you must make your own assessment of its value, which is mainly derived from an appreciation of why Waldfogel’s thesis is absurd. That critical exercise raises fundamental questions about modern economics; and about the models of rationality that are here driven to ludicrous extremes.

We are uncertain about our own preferences, the choices that are available, and the properties of the goods and services we might own. We solicit opinions and experiences, and buy items we do not understand on the basis of trust in others and the reputation of the provider. The best of all presents is one we did not know we wanted but love when we receive it.

In the absence of such pervasive uncertainty about value, most trade in financial markets would not take place. Uncertainty generates most of the profits, and the problems, that we see in these markets. If there were really rational expectations, there would be no oohs and aahs on Christmas morning. Since parents and their children would be using the same model of the world, they could never surprise each other. But they constantly do. The anticipation children feel in the run up to Christmas is a key part of the excitement for them and their parents. Anticipation provides pleasure even if the outcome is disappointing.

That is why people continue to buy lottery tickets and also why they buy structured products whose promises so often exceed their delivery. The model of rational choice under uncertainty insists that only the outcomes of a gamble matter, not the process that generates the outcomes. But anyone who has visited a casino, a racetrack or a trading floor knows that this account is wrong.

We attach different values to an expected receipt, an unexpected receipt and a gift from a close friend, even if the items we receive are the same in each case. The gift we did not know we wanted is a joy, and the gift which is exactly what we wanted is also a joy, though for different reasons. We derive satisfaction from someone else understanding us well enough to know what it is we do want.

Processes matter to us as well as outcomes, and so we genuinely appreciate gifts even if we don’t really care for the item. Waldfogel might feel pleased that a gift of a toilet roll, which he certainly values at more than its cost, has saved him an otherwise obligatory expenditure of 25c. But most people would not. The thought is not the only thing that counts, but the thought certainly does count. So we resent bankers’ bonuses, are anxious that people we have not met and never will meet should receive decent medical care, and would prefer to give someone $100 to spend on food than to give them $100 to spend on their own choice between food and methylated spirits.

Some economists believe that love and beauty and fairness and justice are just cheap talk, and do not influence human actions. Others acknowledge that such abstract concepts influence our behaviour but believe such notions have nothing to do with economics. The corrosive effects of these misconceptions do not just explain why economists are bad at explaining the joys of Christmas; it also explains why they are bad at explaining financial crises.