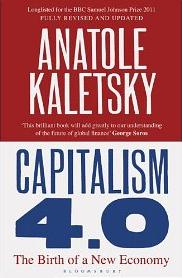 Capitalism 1 was a world of laisser faire. This concept dominated economics and economic policy from The Wealth of Nations to the Great Depression. Capitalism 2, the product of that depression, recognised the interdependence of politics and economics, and gave government a role in macroeconomic management and the direction of industry. It fell apart in the inflationary malaise of the 1970s.

The coming of Ronald Reagan and Margaret Thatcher inaugurated Capitalism 3, a regime of market fundamentalism in which inequality widened and the financial sector flourished. The credit crunch of 2007-08 is the trigger for an equally substantial revision. Today we face the prospect, not of the demise of capitalism, but of a new form – Capitalism 4.

That is the thesis of Anatole Kaletsky, an editor-at-large for The Times and a prolific commentator. His book is a provocative review of many current political and economic controversies, and includes a substantial section on the failures of economic theory. A tone of universal certainty prevails throughout – two pages tell us what should be done about Britain’s National Health Service, another two pages describe the answer to world energy problems and climate change.

Such confidence is somewhat inconsistent with the book’s philosophical approach: the world is characterised by radical and inescapable uncertainty, which we cannot eliminate but can manage. The enduring strength of capitalism is adaptability, which makes it reasonable to have confidence that problems will be solved without specific knowledge of the mechanics of their solution.

This is a very different view of capitalism from market fundamentalism, which believes that human progress is best achieved by imposing as few restrictions as possible on a natural impetus towards greed, and that economic decisions are based on rational expectations in efficient markets in which prices incorporate all possible knowledge of the future. In my view Kaletsky is absolutely spot on in this analysis of why capitalism works, and in his explanation of why market fundamentalism has proved such a dangerously misleading guide to policy.

So what does Kaletsky’s Capitalism 4.0, which rejects both laisser faire and any economic model derived from efficient markets or rational expectations, look like? Capitalism 4 controls government spending but prefers Keynesian stimulus to budget-balancing austerity. It favours free markets, but not uncritically, and is concerned to mitigate inequality. Capitalism 4 is, above all, pragmatic. In fact, it looks distinctly like Capitalism 2.

If we could delete the years 1965-85 from history, Capitalism 2 mostly worked pretty well. Why did it go wrong? For Kaletsky, the decisive event was President Richard Nixon’s abandonment of the dollar’s link to gold in 1971, which inaugurated the era of floating exchange rates. But Nixon’s devaluation was less the cause of inflation than the result: price levels around the developed world had been rising at an accelerating rate since the 1950s.

The explanation lies elsewhere. The stability and widely distributed growth achieved under Capitalism 2 created rising expectations that growth was eventually insufficient to satisfy. Inflation was the easiest political response. Capitalism 3 was a reaction to that failure.

It is good to be pragmatic, but pragmatic policies that are not rooted in any guiding principles are incoherent. That was the experience of Kaletsky’s two principal villains – Nixon; and the man whom Kaletsky holds personally responsible for the credit crunch, Hank Paulson, the former Treasury secretary. The criticism is not unfair – even among politicians Nixon was unusually unprincipled and Mr Paulson unusually incompetent. But Kaletsky’s view of history is one that exaggerates the role of particular individuals and decisions. The collapse of Capitalism 2 was not caused by Nixon, nor the collapse of Capitalism 3 by Mr Paulson: the collapse of these modes of capitalist behaviour was the product of their own internal contradictions, to borrow a phrase, and Capitalism 4 can only thrive if it resolves the contradictions of Capitalism 2 more effectively than did the politicians of the era of the Great Society and “you’ve never had it so good”.

There are now many – too many – books on the credit crunch. Kaletsky’s considerable achievement is to put these events in a perspective that looks back to history and forward to an extended future, and to do so in a framework which goes far beyond a chronology of events. His book is a major contribution to the debate on the nature of the market economy that needs to follow the practical failures of market fundamentalism.