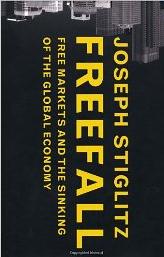 This is the best book so far on the financial crisis. Joseph Stiglitz, the Nobel prize-winning economist, is knowledgeable about the historical background, immersed in the policy debate and a pioneer of the economic theories needed to understand the origins of the problems. Although the material is necessarily difficult at times, the book is also easy to read. It is therefore indispensable not just for those who (like me) are broadly sympathetic to the Stiglitz position but for those who would rebut these charges.

Stiglitz’s account begins in the 1980s, the decade of deregulation and privatisation. The symbol of these changes for financial markets was the replacement of Paul Volcker by Alan Greenspan as chairman of the Federal Reserve Board. This set the way for light regulation of the banking system and created a willingness to respond to any market setback with a relaxation of monetary policy – the “Greenspan put”. These developments were not the result of policy oversight but of policy design. Conservatives and Wall Street got the policy framework they had sought.

“The system that failed so miserably didn’t just happen, it was created. Indeed many worked hard – and spent good money – to ensure that it took the shape that it did,” writes Stiglitz. The influence of major banks, and the resources they devote to lobbying activities, is a theme to which Stiglitz repeatedly returns. Not surprisingly, since he saw that power force him out of his job as chief economist at the World Bank.

The story of the run-up to the crisis has now been told often. The collapse of the dotcom bubble at the turn of the century led to plentiful, cheap money, the growth of securitisation (debt-repackaging), and increasingly complex financial instruments that made it difficult to assess underlying risks. The aggressive promotion of new mortgage structures was viable only on the assumption that constantly rising house prices could allow frequent opportunities for refinancing.

Stiglitz’s account is distinguished by its emphasis on the underlying economics. He judges that Greenspan’s world view was characterised by two basic errors. First, Greenspan underestimated the significance of the agency problem. The incentives of mortgage salesmen, of the inventors of structured products and of the executives who allegedly supervised them were not aligned with the long-run interests of the institutions for which they worked. The bemused former chairman recognised this problem in 2008. “I made a mistake in presuming that the self-interest of organisations, specifically banks and others, was such that they were best capable of protecting their own shareholders and their equity in the firms.”

Stiglitz explains that the second error made by Greenspan and those who thought like him was a misinterpretation of the motives for trading new financial products. The orthodox view was that this development represented a more sophisticated tailoring of risk to the specific needs of individual holders. Stiglitz prefers to believe that trade was driven by information asymmetry. In the “greater fool” theory, people who understand a little about the nature of the product they are selling dump risks on people who understand less. In the orthodox view, complex securitisations reduce overall systemic risk: in the revisionist view, they increase it. The events of 2007-2008 would show, decisively, that the revisionists were right.

Stiglitz recounts the failure of policymakers to acknowledge the magnitude of the crisis even after the initial freezing of credit markets in the summer of 2007. Perhaps this criticism is unfair: you don’t contribute to either financial stability or economic recovery by telling people that things are worse than they think.

It is hard to disagree with Stiglitz’s excoriation of the lack of accountability or conditionality in the Troubled Asset Relief Programme package that followed – a deficiency exemplified, as he notes, in the programme’s euphemistic name. Stiglitz wants to speak well of the Obama administration but finds it difficult. He is strongly critical of what he regards as its ready acquiescence in Wall Street’s self-promotion and in the inadequacy of its fiscal stimulus.

Stiglitz has long been a critic of efficient market theory. He is co-author of a definitive 1980 theoretical article, which identifies that theory’s inherent contradiction: if all information is incorporated in securities prices, the incentive to obtain such information would be eliminated.

This is a familiar argument. But in this book Stiglitz goes further. He attacks the premise of rationality as consistency which is the key assumption of much of modern economic theory, including virtually all financial economics. This leads to a brief discussion of the challenges posed by more realistic descriptions of market participants’ behaviour towards risk, incorporating insights from behavioural economics.

Stiglitz might say more about these issues. And, in doing so, he might acknowledge more fully the problems that fallible human nature poses for the better regulation he advocates. The book is weakest in its discussion of remedies. Stiglitz repeatedly argues, in a wide variety of contexts, that regulation is required but rarely embarks on any extensive specification of what such regulation might entail.

But to observe that the operation of the economic and financial system might in principle be improved by regulation is one thing: to describe an operational set of rules which would achieve that result is altogether another.

So, in the end, his prescriptions read like a complaint that the world is not run by sensible, highly intelligent people like himself. Perhaps that observation is a reasonable complaint. But it does not represent a viable policy framework. What we need is a robust financial system that can accommodate the often arrogant and greedy people who take part in it and the often mediocre and embattled people who will regulate it. That means not just more rules, but carefully judged structural reform.

Books: the good, the bad and the cheesy