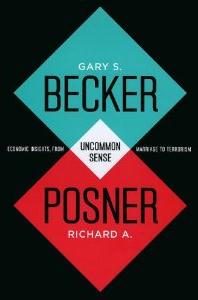 Uncommon Sense finds its origin in an unusual blog. The creators of the blog and authors of the book are Gary Becker and Richard Posner. Since the death of Milton Friedman, the 79 year old Becker has been doyen of the Chicago school of economics. Posner is a federal judge and unbelievably prolific author.

The format of the blog is that Becker or Posner posts a weekly essay on a topical theme. The essay is generally 500-1000 words long, well beyond the attention span normally required in the blogosophere (there is no other word); also beyond the length that it is comfortable to read on a computer screen. The other author makes a response at slightly shorter length.

This book is a compilation of 50 essays and responses posted between 2005 and 2007. The subjects covered range across topical issues from gay marriage to terrorism, from traffic congestion to CEO compensation. As a judge, Posner is proscribed from political comment but in practice this seems only to rule out reference to political candidates or parties.

The style can best be seen from example. Becker and Posner discuss the imposition of a ban on trans fats in New York restaurants, imposed in 2006. The adverse consequences for health of these compounds seem unequivocal, if uncertain in magnitude, and the costs of removing them small: cheap substitutes are readily available. The main advantage of trans fats is increased shelf life in processed foods.

Posner estimates the annual benefit to the state budget of the ban at $3.5bn. This figure is calculated on the basis that 500 deaths per year from coronary heart disease would be eliminated, and attaches a value of $7m to each death. The first figure is based on assertions by campaigners, while the latter is supposedly the amount Americans are willing to pay to reduce the probability of death. Posner then conjectures that the annual turnover of restaurants affected by the ban is $6bn. A 1% increase in their costs would amount on aggregate to $60m.

Posner speculates on possible errors in these back of envelope figures. People who die of heart attacks are mostly elderly, and since many would die soon anyway – and possibly of more costly diseases – their lives, he concludes, may be less valuable than average. The figure of 500 deaths avoided looks high. But the excess of benefits over costs seems so clear that it would be sustained on almost any reasonable assumption.

Becker responds that, if the benefits are so clear, they must also be clear to those who eat in restaurants. Diners should therefore be willing to pay a substantial premium to establishments that eschew the horrid stuff. But many restaurants continued to use trans fats, though many did not. Becker infers that the benefits of removal are less, or the costs greater, than Posner implies. So he comes out against the ban, fulminating against paternalism.

Posner considers Becker’s libertarian argument, but emphasises the costs of information. Most people know little about the hydrogenation of vegetable oils, and do not want to spend much time finding out. They would prefer descriptions of dishes on menus to whet their taste buds than warn of the health risk from the ingredients.

The style of argument will be familiar to readers of this newspaper who follow this newspaper’s Undercover Economist, a column by Tim Harford. In public debate today over issues such as trans fats, the argument tends to be joined between vested business interests on the one hand and cranks and ideologues – food faddists, libertarians, enemies of multinationals- on the other. There is considerable value in demanding the presentation of arguments in a more structured way. Even if we do not agree with the arguments of either Posner or Becker, to respond to their provocations clarifies our own thoughts. Anyone who reads the fifty exchanges in this book will be encouraged to confront their prejudices and marshal cogent and reasoned arguments.

Posner and Becker are hardly free of preconceptions, and though their conclusions differ on this issue their approaches are similar. Posner is obsessed by cost-benefit analysis and Becker in love with the market. But the book is like a series of tutorials from a good teacher, and the object of a good tutorial is not to tell the student the answers. The objective is to equip the student to think more effectively about the quite different problems that he or she will face in everyday life. Tutorials with Becker and Posner would undoubtedly be very valuable experiences.

But the objectives are different. The Undercover Economist has his tongue firmly in his cheek: but Becker and Posner intend their analyses to be taken entirely seriously. They are writing not to provoke, but to persuade. I found no trace of irony or humour in the 360 pages. The authors’ purpose is to tell their readers how matters should be, and they have no doubt that the answers will be established on the basis of the kinds of reasoning they favour. They demonstrate no sense that there might be limits to the scope of that reasoning.

The citation for Becker’s 1992 Nobel Prize for economics congratulates him for extending the domain of economic analysis into new areas of human behaviour. That is a proper endeavour. What becomes silly, however, is to believe that economics alone provides sufficient explanation of human behaviour. Becker’s analysis of the trans fats issue is interesting only to the extent that his account prompts Posner, and others, to explain why it is nonsense.

Yet trans fats raise a question for which an economic approach is useful, if not the whole answer. When the authors turn their attention to capital punishment, or national culture, economic imperialism manifestly fails. The considerations which most people would rightly regard as central to these issues simply cannot be handled within the economic framework the authors employ.

The title Uncommon Sense contains intended ambiguity. That ambiguity remains. The unintended lesson of the book is that economics needs to be approached within a framework of ordinary Common Sense.

The Edge of Now – David Howell