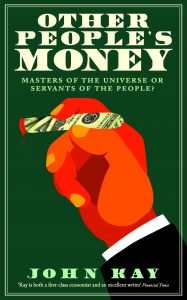 On November 24th, John accepted the Saltire Society Literary Award for best non-fiction book of 2016 for Other People’s Money, of which the Society says:

The global economic scene, with its practices and structures, has become impossible for any of us to ignore, despite its daunting complexity. John Kay provides an invaluable explanation grounded in academic rigour while showing, in the lucidity of his highly accessible account, why he is such a successful teacher.

John’s acceptance speech was as follows:

Other People’s Money begins ‘I was a schoolboy in Edinburgh in the 1960s.’

And it ends ‘Perhaps the most significant political development of our time is the populist rage of disgruntled people who are no longer confident that the country in which they live is in tune with their values… Fringe parties across the developed world have attracted the votes of ‘left-behind’ groups; parties with nothing in common except a shared sense that ‘they’ – those in charge – fail to understand or identify with the needs and values of the protestors.’

I wish I had been less prescient.

But – to begin at the beginning. I was a schoolboy in Edinburgh in the 1960s. At the Royal High School, in that magnificent but now sad building on Calton Hill. It was – as it is today – a remarkable school: my contemporaries included a future Foreign Secretary, the star of an Oscar winning film, a clutch of Judges, a gaggle of Professors, and a captain of the Scottish rugby team.

The school was especially proud of its English Department, headed by Hector McIver, a man from the Western Isles for whom English was a second language. McIver conducted a literary salon that met in the pubs of Rose Street – the Cafe Royal, the Abbotsford, and above all Milne’s Bar. McIver was a close friend of Dylan Thomas, Louis MacNeice, Hugh MacDiarmid. I was never taught by McIver, but Sandy Forsyth, one of McIver’s circle, was my form master throughout my time at the School.

I think it would be right to attribute any literary success I have subsequently enjoyed to their influence. But the nature of the relationship was stormy – Forsyth was profoundly uninterested in his administrative duties, and during my time at the Royal High left much of them to me. I remember that he accused me of ‘poetic algebra’. By this he meant that once I had enjoyed the lyrical cadences of Dylan’s verse – as anyone would – I would ask relentlessly ‘so what was Thomas trying to say?’ My literary hero was not, as theirs was, Hugh MacDiarmid – it was – and is – George Orwell, whose honesty of thought, clarity of prose, and eye for the telling detail that is worth a thousand words of explanation, is a model for any writer of non-fiction.

Would Forsyth and McIver have applauded today’s award? In a Royal High essay competition when I was a pupil there, submissions were anonymous, accompanied by an envelope that carried the author’s pseudonym on the outside and the real name of the writer inside. The competition was judged by Karl Miller, then literary editor of The Spectator, the former pupil of whom McIver was most proud. The envelope was opened with a dramatic flourish at the annual prize-giving.

In my fourth form, I was the winner. McIver and Forsyth were not congratulatory: they were furious. I was not supposed to win. With hindsight, I am sure the successful essayist was meant to be John Whitworth, a boy two years above me. I am pleased to say that this did not inhibit Whitworth from becoming a successful poet, with many published volumes.

Perhaps his best known poem is ‘Jenny Jefferey’. It begins:

Jenny Jefferey! I loved you with a lonely passion when
With our turned-up raincoat collars, and our Woodie packs of ten,
Our lot drank Skol Lager in Milne’s Bar and hoped we looked like men; Sixth Year Mafia out,
Ten o’clock demands a carry-out,
Quarter vodka and six cans of Stout.
Pies and puddings at the ‘Deep Sea’

For those in the audience who are under 40, the ‘carry-out’ was the institution by which Scotsmen – and I do mostly mean men – continued to drink after puritanical laws closed the pubs at ten o’clock. And the Deep Sea is not the ocean Jules Verne explored but the fish and chip shop, at the top of Leith Walk, that still thrives today.

That was Edinburgh in the 1960’s: and it is with a very genuine pleasure that I return, fifty years later, to accept this prize in a city that is now the cosmopolitan place that McIver and Forsyth had wished it to be. And I think they would, despite everything, be as proud of me as I am grateful to them

The purpose of the corporation