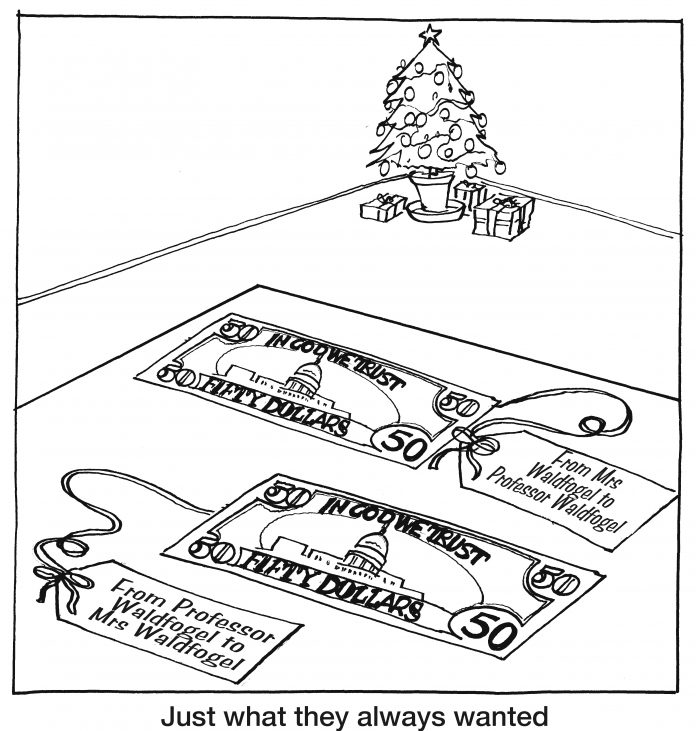 It is Christmas once again, and across the world people will take a day – or longer – off work to spend time with relatives they may not like. And think of the damage to the economy! Two days of leisure amount to lost GDP of around 1%, around £20 billion, enough to forgive student debt and double the size of the police force, or to finance all the promised increase in expenditure on the NHS.

But the waste is even greater, as demonstrated in the work of Professor Joel Waldfogel. In 1993 Waldfogel published an article in the American Economic Review deploring the inefficiency of the practice of Christmas giving. Most gifts, he wrote, were worth less to their recipient than the money the donor had spent.

Suppose I give you a tie that cost me $50. It is unlikely that you would have bought exactly that tie if you had found a $50 note on the pavement. The difference in value between what I bought and what you would have done with the money is a measure of the inefficiency of gift giving – the deadweight loss of Christmas.

The American Economic Review encourages its contributors to support their analysis with data. Professor Waldfogel meets this requirement. A survey of 86 gift recipients found that they would have been willing to pay an average of $313 (£216) for the Christmas gifts they received. But the ungrateful interviewees estimated the total cost of these gifts to the donors at $438. Another sample would have been willing to sell their Christmas presents for an average of $462. This group estimated the average expenditure by donors at $509. Presents from aunts, uncles and grandparents were particularly inefficient. On average they were worth less than two-thirds of their cost. Gifts from friends and close family members did somewhat better.

Applying these results to the overall incidence of gift-giving in the United States Professor Waldfogel estimated that the total loss to the American economy attributable to Christmas 1992 alone was between $4 billion and $13 billion. Nor is that all. In the interest of political correctness, Professor Waldfogel reminds us that references to the deadweight loss of Christmas should be understood to apply equally to Hanukkah and other holidays with gift-giving rituals.

Despite this compelling evidence, the myth of Santa Claus continues to be a drag on western economies. Fortunately, Professor Waldfogel expanded his initial argument into a closely argued book.  Scroogenomics follows the line of thinking which won Gary Becker the Nobel Prize in economics. “All human behavior”, Becker wrote “can be regarded as involving participants who maximize their utility from a stable set of preferences and accumulate an optimal amount of information and other inputs in a variety of markets.  If this argument is correct, the economic approach provides a unified framework for understanding behavior that has long been sought by and eluded Bentham, Comte, Marx, and others.” Ambitious indeed!

The appeal of such arguments lies, at least in part, in their teasing quality: are the authors really barking mad or are they just kidding?

Scroogenomics costs £8.99; you must make your own assessment of its value, which is mainly derived from an appreciation of why Waldfogel’s thesis is absurd. That critical exercise raises fundamental questions about modern economics; and about the models of rationality that are here driven to ludicrous extremes.

We are uncertain about our own preferences, the choices that are available, and the properties of the goods and services we might own. We solicit opinions and experiences, and buy items we do not understand on the basis of trust in others and the reputation of the provider. The best of all presents is one we did not know we wanted but love when we receive it.

In the absence of such pervasive uncertainty about value, most trade in financial markets would not take place. Uncertainty generates most of the profits, and the problems, that we see in these markets. If there were really rational expectations, there would be no oohs and aahs on Christmas morning. Since parents and their children would be using the same model of the world, they could never surprise each other. But they constantly do.

Risk is troubling, but uncertainty often exhilarating. The standard model of rational choice under uncertainty insists that only the outcomes of a gamble matter, not the process that generates the outcomes. But anyone who has visited a racetrack or a trading floor, or chattered with excited children on Christmas eve, knows that this account is wrong. The anticipation children feel in the run up to Christmas is a key part of the excitement for them and their parents.

We attach different values to an expected receipt, an unexpected receipt and a gift from a close friend, even if the items we receive are the same in each case. The gift we did not know we wanted is a joy, and the gift which is exactly what we wanted is also a joy, though for different reasons. We derive satisfaction from someone else understanding us well enough to know what we want better than we do ourselves.

Processes matter to us as well as outcomes, and so we genuinely appreciate gifts even if we don’t really care for the item. Conversely, Professor Waldfogel might welcome the gift of a toilet roll, which he certainly values at more than its cost, which saves him an otherwise obligatory expenditure of 25c. But most people would not react so positively. The thought is not the only thing that counts, but the thought certainly does count. So we resent bankers’ bonuses, are anxious that people we have not met and never will meet should receive decent medical care, and would prefer to give someone $100 to spend on food than to give them $100 to spend on their own choice between food and methylated spirits. Christmas at the Waldfogels, when each member of the family gives the other $50 so that they can buy exactly what they would have spent $50 on themselves, would be an impoverished affair.

There are two ways of reacting to excesses of economic imperialism such as those of Becker and Waldfogel. One is to take the view that there are certain areas of life which are off limits to economists. The assumption that people act as selfish maximisers may be helpful in explaining how business works but there are large areas of social activity – such as Christmas – which need to be analysed in different ways.

But there is something unsatisfactory about a framework of analysis that imposes a dichotomy between the values of the business world and those of everyday life. It is humanly very difficult to be a beast in the board room and a saint at home. The expectation that one set of attitudes will inevitably corrode the other is the basis of much popular distaste for business, and provides a powerful rationale for an insistence that business values be kept away from nurturing activities such as education and healthcare.

Better to look for explanations of human behaviour that are comprehensive. Gifts are part of business life as well as social life. A gift is a demonstration of our commitment to a relationship. That is why it is unusual, but not unknown, for us to make gifts to strangers. Generous people may wish to make their commitment to the society in which they live. But most feel the strongest commitment to individual members with whom they are acquainted. The pleasure we take in the exchange of gifts is in the affirmation or reaffirmation of these commitments.

The connection between the gift and the relationship means that the gift should be appropriate. Too small a gift demeans the value we place on the relationship. Too large a gift appears to impose an obligation greater than the other party wishes to accept. The best gifts are those which reflect some intimate knowledge and demonstrate the special nature of the relationship. That may be the reason that Professor Waldfogel found that friends gave more efficient gifts than uncles and aunts.

There are still a few shopping days left before Christmas. Perhaps I will put down my copy of the American Economic Review and join the crowds at Harvey Nichols after all.

Parts of this article were previously published in the Financial Times

How to safeguard savers in a banking crisis

Let’s talk about the market economy