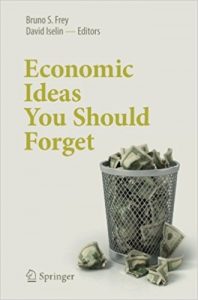 The axioms of revealed preference have been part of the foundations of economics since they were formulated by Paul Samuelson in 1947.   These principles allowed economists to continue to use the calculus of utilitarianism even though utilitarianism had ceased to be a fashionable philosophical doctrine.  And they enabled economists to give a particular, and special, meaning to the term rationality.  In modern economics rationality is equated with consistency.

But consistency, as Ralph Waldo Emerson said, is ‘the hobgoblin of little minds, adored by little statesmen and philosophers and divines’. Ordinary people do not equate rationality with consistency.  It is consistent but not rational to maintain the belief that there are fairies at the bottom of the garden.

Nor is it inconsistent to make different choices if one dines at the same restaurant on successive nights.  Of course, it is easy to reassert consistency by asserting that the two situations are not in fact the same – the prior history has changed the circumstances of choice –  and so retain the claim that behaviour is ‘rational’.   But this saves the day only by draining the claim of rationality of any content. Whatever we do must be rational otherwise we wouldn’t have done it.  More or less any behaviour can be rescued from the charge of irrationality in this way.

The problem is that in a complex world, there is no objective means of defining whether two situations are in fact the same or are different.  This is particularly problematic when this axiomatic approach is applied to choices made with imperfect knowledge and under radical uncertainty, which in practice describes most of the choices we make in the real world.

Though not necessarily the choices we make in a psychologist’s laboratory. Behavioural economics has been used to berate us for our ‘irrationality.’  But much of what is described as ‘irrationality’ is simply a manifestation of the coping strategies humans have developed over millennia to deal with complex situations of which they can have only limited understanding or knowledge.  We then invite hapless subjects to make decisions in wholly artificial situations in which the problem is completely specified – at least to the satisfaction of the experimenter.  When subjects read a legend that says ‘a bird in the the hand’ as ‘a bird in the hand’, it is the designer of the experiment, not the subject, who is making the mistake.

Perhaps we would do better to adopt the Oxford English Dictionary’s definition of rationality; ‘endowed with reason, exercising one’s reason in a proper manner, having sound judgment.’

Size and Scale 3: Size does not guarantee survival

Saintly lies and the devil that lurks in double talk