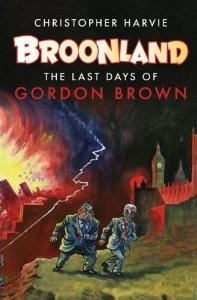 There are elements of classical tragedy in the rise and fall of Gordon Brown.  A brooding, private intellectual is allied with a charismatic leader.  The pair sweep triumphantly to power.  But the intellectual nurses a grievance, over the public success of his colleagues.  This festering resentment contributes to the destruction of both men.  Eventually toppling his rival, our tragic hero holds the kingship for a brief, unhappy period.

The tale is waiting for its Shakespeare or Euripides.  In the meantime Christopher Harvie provides source material, but only for the first and fifth acts of the play.  Harvie knew Brown when they were Scottish Labour Party activists together in the 1970s.  Harvie then disappears from the action for over two decades, in voluntary exile in a chair at the University of Tübingen, before returning to politics in 2007 as a Scottish Nationalist MSP.

I defy anyone interested in Scottish politics not to enjoy this book.  Although the author is a serious scholar, who has spent his career teaching modern political history, the style is one of wide-ranging, opinionated, witty conversation.  As in such a conversation, Harvie pursues hobby horses and recounts experiences without apology  or necessarily relevance.  But the result is fun.  It is almost as difficult to stop reading a book by this author as it is easy to stop listening to a speech by its subject.

Brown brought to British politics a rhetorical style, based on bludgeoning audiences into submission with selective facts and statistics, which is normally encountered only in authoritarian regimes.  The mood of sycophancy which characterised the Brown entourage is nicely captured in Harvie’s quotation of the effusive thanks of the editor of a collection of Brown’s speeches for permission to quote them.  Now that the Brown era in British politics is over, I can confess that a copy of the result, Moving Britain Forward sits unopened on my bookshelves.  There is a serious point here. The speeches of Blair, or Cameron, or Clegg, may be full of flim-flam, but these men exhibit greater respect for their audiences.

Harvie’s account of the young Brown, like other descriptions of that early career, reaffirms the acute intelligence and absolute determination which marked him out as a potential future Prime Minister.  So why then did Brown fail in the job?  That is the issue that acts two to four of our play would need to investigate.  But that is, necessarily, the sketchy element of Harvie’s account in which the young parliamentary candidate of his story reappears, twenty-five years later, as a seasoned Chancellor the Exchequer.

Harvie suspects that the relationships between government, New Labour, and Brown on the one hand, and the City of London and the financial services sector on the other, is central to the story. I think he is right.  In retrospect, Brown’s speech at the opening of Lehman Bros new headquarters at Canary Wharf in 2004 was a symbolic moment.  ‘In wishing Lehman Brothers the success it deserves for its future, let me thank you for the privilege of being here’.  This from a Labour Chancellor of the Exchequer.  Perhaps that line would be a fitting final end to Act Three.

The man who was in 1989 the author of Where there is Greed had, at Canary Wharf in 2004, discovered where there was indeed greed, and on a very large scale.  But he was there to applaud, not to destroy.  The forces of greed were Moving Britain Forward.  And they were:  the global success of the City would seem to be a source of British international competitive advantage.  The tax revenues financial services generated would help fund investment in schools and hospitals.  The new instruments bankers constructed would enable much of the cost of such investment to be removed from the public sector balance sheet.

So when the financial sector seemed to fall apart in 2008, Brown was left with little to say.  He could, and did, insist that banks gave up equity in return for their handouts (in the US, the former Goldman Sachs boss who was Treasury Secretary took the view that such an exchange would constitute socialism;  the American way would accommodate favours for the rich, but state ownership was anathema).  Brown could proclaim the need for global regulation at pointless international economic summits, at which his intelligence and experienced enabled him to cut an impressive figure.  But nothing much would happen, globally or domestically.

Harvie is much exercised by ‘illegalism’, his term for ‘the shadowland between “robust business” and outright crime’.   Yet his discussion of this shadowland is mostly concerned with modern versions of rogues like those found in the novels of John Buchan and Eric Ambler – the people who engage in business activities in banned products,  such as drugs or, prostitution or illicit arms.  Or the perpetrators of ‘carousel fraud’ – a complex racket involving export and import of small electrical goods which may have extracted billions of revenue from the UK exchequer.

But carousel fraud is small change in macroeconomic terms. I thought the discussion of illegalism might lead to a discussion of the murkier aspects of financial services, the world of subprime mortgages and synthetic collateralised debt obligations – things that happened in and around that Lehman building.  Perhaps these products are all too complicated for a book like this one, but that is the point.   Is it fraudulent to sell people products which, if they understood them, they would not want to buy?   Is it fraud to trade in ways which generate large commissions for the individuals who undertake the trade, but in the long run cripple the businesses which employ them?  Much of what led to the crisis of 2007-8 fell into one, or both, of these categories.  Whether or not some activities were criminal is likely to be tested in the US courts, although not here, where the authorities have enjoyed little success in prosecuting even the most egregious of white collar crimes.

Perhaps, in retrospect, New Labour’s love affair with the new rich was only a modern version of Ramsay McDonald’s flirtation with duchesses.  When leaders of the left achieve power, they finally confront the elements of society they spent the earlier part of their career railing against.  And they discover the one-time enemy is rich, charming and flattering.  In this way, the more intelligent and resourceful elements among yesterday’s traditional aristocracy and today’s lords of finance have maintained their privileged position against the march of history and the forces of revolution.

Harvie ends his book with the lines of Louis MacNiece

None of our hearts are pure, we always have mixed motives.
Are self deceivers, but the worst of all
Deceits is to murmur ‘Lord, I am not worthy’

And, lying easy, turn your face to the wall.

Harvie speculates on whether Brown’s career would have been different if his socialist Clydeside hero had been, not the ineffectual dreamer Jimmy Maxton, but the practical Catholic businessman, John Wheatley.  Brown’s core problem was that confronted with power he failed to find a compelling way of reconciling the passions that had brought him into politics with the practical realities of the modern economic state.  It is a recurrent problem of socialists in power, and if Blair’s ‘third way’ seemed for a brief moment to paper over the crack, Brown helped to peel the paper away.   And so we come in May 2010 to the end of Act Five:  the tragic hero is deposed by an invading army led by younger, more personable men.