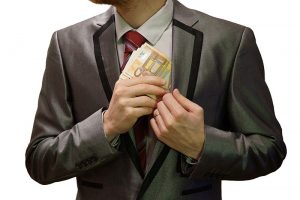 For more than a century, the name Rolls-Royce has been synonymous with manufacturing excellence. So the news that the company has paid £671m to settle allegations of bribery and corruption made by the British, American and Brazilian authorities comes as a shock — to people unfamiliar with the bizarre ways of modern business. The only connection between Rolls-Royce cars, with their pedestrian-unfriendly Spirit of Ecstasy motif protruding from the bonnet, and the company that was fined is the name.

The original Rolls-Royce business was nationalised in 1971 after the company was bankrupted by overruns on its RB-211 engine. The government quickly disposed of the business of Rolls-Royce Motors. The car company has subsequently had several owners — first the defence contractor Vickers, then Volkswagen which sold it in turn in 2003 to BMW, which owns it today. The cars are assembled at Goodwood in England in a plant that bears as much resemblance to an upholstery workshop as an automobile manufacturing facility. Much of the engineering of Rolls-Royce cars had been produced in Bavaria long before BMW took control.

The company that was penalised this week is one of the three businesses that dominate the global supply of aero engines (GE and Pratt & Whitney, both American, are the others). These businesses compete for contracts with buyers of military aircraft and with airlines. These large contracts typically cover not only the supply but the subsequent servicing of these engines. The agreements are necessarily complex and highly technical, and any of the three main suppliers will do a good job. The scope for corruption of the key individuals who will recommend the provider is large and obvious.

It is the admission of such corruption that has led to the fine on Rolls-Royce. Not a fine exactly — the company has agreed to pay out in consideration of a “deferred prosecution agreement”, which means that subject to certain conditions it will not be prosecuted for its wrongdoing.

Imagine the reaction if an individual citizen acknowledged that he or she had not only committed criminal offences but paid large sums of money for prosecutors not to initiate proceedings. Yet such behaviour has become the norm for large corporations. JPMorgan, Johnson & Johnson and Siemens have all paid out settlements totalling billions to stop proceedings for alleged wrongdoing. The detail varies, but in all cases, the company concerned promised to implement an internal compliance programme to discourage similar behaviour in future.

Yet the very prevalence of such settlements is an indication that their deterrent effect is small. Senior executives appear not to mind paying out large amounts of shareholders’ money to escape any personal liability for their actions, or the actions of those whom they ostensibly supervise. In the US, settlements have come to resemble extortion from well-heeled corporations — especially by attorneys for individual states — rather than a means of bringing malefactors to justice. Some Siemens executives went to jail, but that case is exceptional. It is notorious that only small-bit players have been convicted for their role in the 2008 financial crisis and the scandals that have plagued the banking industry since.

This article was first published in the Financial Time on January 21st, 2017.

Pharma responsibilities are to a wider community than its own shareholders