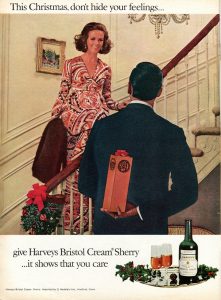 With more than a hint of desperation, the Wine and Spirits Trade Association has launched a campaign to ‘save Santa’s sherry’.  The Association notes that sales of sherry in Britain have fallen by more than half in the last ten years, blaming taxation.  But, as so often, the reasons are not economic, but social and cultural.

It is more than thirty years since I was asked to analyse the state of the sherry market in the UK.  It quickly became clear that the problem was not to explain why the market was in decline.  It was to explain why the market had ever been so large in the first place.  Ever since, I have identified a category of ‘sherry problems’: the unwinding of a historic anomaly needs little explanation, and attention should be directed to the anomaly itself.  The Irish economy grew rapidly from the 1970s until the global financial crisis; not difficult to account for once you recognise that the larger issue is why Ireland’s economic performance fell so far behind that of the UK during the preceding fifty years that followed independence.

The UK sherry market was declining because its customers were dying.  My mother kept a dusty bottle of Harvey’s Bristol Cream in the kitchen, as did her neighbours and friends, and it would be brought out when the Church of Scotland Minister paid a parochial visit, and before lunch (called dinner) on Christmas Day.   The drink was very sweet, and bore little resemblance to anything a Spaniard would have called sherry.

By chance I moved from Edinburgh to Oxford, another outpost of sherry consumption.  Elderly dons would end their last tutorial of the day by offering their students a glass of fino or amontillado.  (Harvey’s advertising agency, anxious to assert the sophistication of their product, hired a college room to film such an episode, but the clip was anachronistic:  the dons knew their wines).

Harvey’s Bristol Cream was a long established product of a Bristol wine merchant, and its success was attributable to effective marketing under the direction first of Jack Harvey, and then led by Francis Showering (after Harvey’s was acquired by Showering’s in the 1960s).  Showering’s success was based on Babycham, ‘the genuine champagne perry’ (whatever that means).   Both products were supported by extensive advertising – Babycham is said to be the first alcoholic drink to be advertised on British television.

The genius of Harvey and Showering was to sell alcoholic drinks whose sweetness was palatable to people unfamiliar with alcoholic drinks, and  who would gain confidence in their choice from the scale of the promotional activity.  Babycham was targeted at young women; wine snobs sniggered but Francis Showering laughed all the way to the bank. In the 1970s, the promotion of branded wines played a similar role in popularising wine drinking. (Hirondelle, sweetish wine blended from surplus production, mostly from Cyprus, became market leader in this segment).

Merry Christmas to all, whether or not you celebrate it with a glass of Bristol Cream.

A wider Europe puts the accent on English