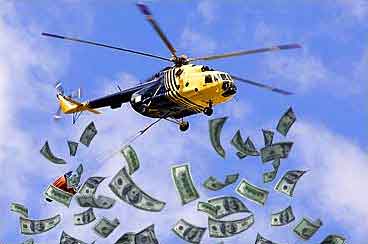 Shamans who failed to deliver what they promised have always attributed the lack of result to the insufficient faith of their followers, and then advocated new potions, accompanied by appropriate mumbo jumbo, which the claim will finally deliver the desired effect. So the manifest failures of monetary policy to promote recovery in the real economy have been met with repeated calls for ‘unconventional monetary policies’; ‘quantitative easing’ has been deployed to maximum extent and minimal effect; with interest rates at historically unprecedented levels the new demand is for schemes to circumvent the ‘zero lower bound’ seemingly posed by the impossibility of interest rates (much) below zero. And then there is the revived interest in ’helicopter money’

Today I begin with ‘helicopter money’.

The primary reference on the analytics of ‘helicopter money’ is Willem Buiter’s recent article, which identifies three conditions for the policy to work. This note explains why these conditions are unlikely to be fulfilled in a modern economy.

“Bookkeeping by double entry… is among the finest inventions of the human mind” The source – JW van Goethe – is improbable; the observation is correct. For every credit there is a corresponding debit; for every financial asset there is a corresponding liability. The double entry principle is immutable as the first law of thermodynamics, to which it bears a certain resemblance.

You cannot create financial assets out of nothing, just as you cannot create energy out of nothing. There is no financial free lunch, just as there is no perpetual motion. The laws of thermodynamics render perpetual motion machines impossible, though it may be hard to identify the defect in any particular device. And similarly, schemes which purport to fund government spending or tax cuts at no cost to present or future taxpayers are necessarily fatally flawed, even if it requires a little effort to work out the flaw.

Actually, it is not very difficult to identify the flaw in the idea of stimulating the economy by dropping ‘helicopter money’. The confusion begins because fiat money – the coin and paper currency that we use in everyday transactions – is manifestly an asset;  and yet the promise – to pay the bearer one pound on demand –  appears meaningless. If you turn up at the Bank of England to demand one pound, the teller will smile benignly and exchange it for an identical coin.

‘Let us suppose now that one day a helicopter flies over this community and drops an additional $1,000 in bills from the sky, which is, of course, hastily collected by members of the community. Let us suppose further that everyone is convinced that this is a unique event which will never be repeated.”

At the end of the same day, the $1000 in bills would end up back in the vaults of the Central Bank. They would have been returned there by the commercial banks of the lucky members of the community who had collected the bills as they landed from the sky and placed them in deposits for safe-keeping. Or they would have been banked by the owner of the champagne bar in which the members of the community had celebrated their good fortune. The commercial banks would now hold larger deposit balances with the Central Bank – a government liability. (The accounting relationships between Central Banks and governments are complex but of no material importance.) And within a few days the banks would have used these deposits with the Central Bank to buy other assets – either from government or with payments which the Central Bank would have to honour.

First, commercial banks hold deposits at the Bank of England at the level necessary to meet their transactions requirements. There is no longer an obligation to hold any particular level of reserves. (Such an obligation could be imposed, there once was such an obligation, and in some countries a requirement of this kind remains in force.)  But in any event such deposits remain assets of the commercial banks and liabilities of the Central Bank, which can be called on in case of necessity. Otherwise the obligation would simply represent expropriation of bank shareholder assets.

Second, currency already in circulation, although small in relation to GDP (3% or so) or total government debt (4% or so) is enormous relative to the scale of everyday cash usage. Notes in circulation amount to over £1000 per capita in the UK and the figures for the eurozone and US are much higher. As cash ceases to be necessary – or even acceptable – in payment for taxi and bus fares, cups of coffee and daily newspapers, the use of cash for hoarding and for illicit purposes is increasing. The euro and US dollar are the most widely acceptable currencies and hence the most attractive for illegal activities, or as a store of value in places where there is no trust in any other. The recent decision by the ECB to withdraw 500 euro notes, which account for most of the value of euros in circulation, is a recognition that cash is today the currency of the drug dealer and the money launderer.

The implication of points one and two is that there is no reason to think that ‘helicopter money’, in any quantity, would have any material effect on either the volume of currency held outside the banking system or the level of transaction reserves held by commercial banks.

Third, measures of money other than fiat currency – including sight deposits and other entries on bank balance sheets – are manifestly assets which are fully matched by liabilities. Each penny of customer deposit corresponds to a penny of bank obligation. The claim that banks ‘create money’, while true in a certain sense, does not repeal the law that there is a financial liability corresponding to every financial asset. Everything that has been said above about fiat money is true a fortiori of broader money.

There is no free lunch

“Helicopter money” is simply another mechanism of fiscal stimulus funded by government borrowing. In my view, there are good arguments for adopting such a policy. One might propose that, since several governments, including up to now the UK, have set their face against a policy of fiscal expansion, disguising a u-turn with waffle about helicopter money is a route by which these governments can change their mind without admitting they have done so, or even understanding they have done so. I am not impressed by such reasoning; but perhaps a longstanding distaste for hypocrisy has got the better of me.

Or one might acknowledge that the effects of fiscal expansion will be different depending on the methods by which it is implemented. That is a better argument, to be discussed in subsequent parts of this essay.

Words of comfort for the grieving investor

Shame and kudos are the spur